In this quick data-tidbit we aim to explore the hypothesis that current Oil Price decreases are driven by US dollar strength.

First let’s define some data, when I say Oil I am referring to the WTI Crude Futures, Continuous Contract #1 and for the U.S.D. I am using the Trade Weighted U.S. Dollar index (https://research.stlouisfed.org/fred2/series/DTWEXM).

Let’s first explore how oil price reacts to changes in the U.S.D. Index by using a simple linear regression, after regressing the percent changes in oil price against the percent changes in the U.S.D. this gives us a sensitivity of (-1.49) which implies that for a 1% change in the U.S dollar index we can expect a -1.49% decline in Oil Prices, note this for the entirety of the data set which will be have a different error rate than the rolling analysis and thus may not be directly comparable.

Now let’s look at correlation which is a different way to measure a relationship between two variables, looking at the long term correlation between the two gives us -0.31 which goes hand in hand with the observed inverse relationship, however more interestingly is how the relationships have changed over time. 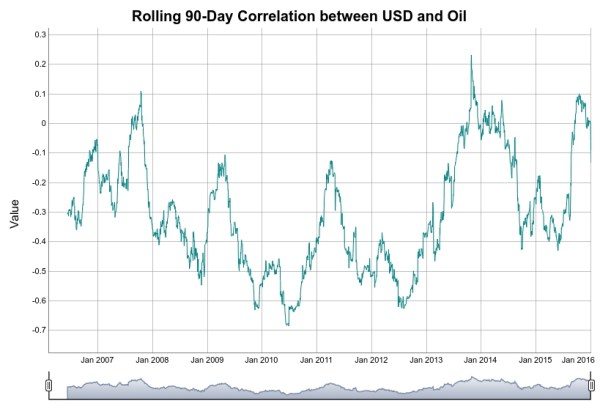 To investigate this idea further let’s look at the rolling regression beta and the rolling r squared of regressing USD on Oil. 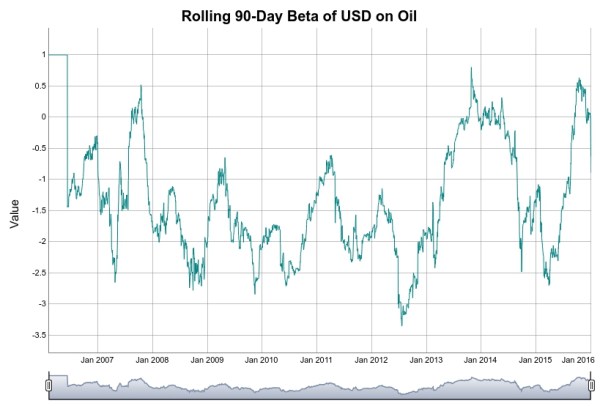 The rolling beta is currently -0.89 which is much weaker than the long term beta of -1.49 indicating that the sensitivity is weaker. 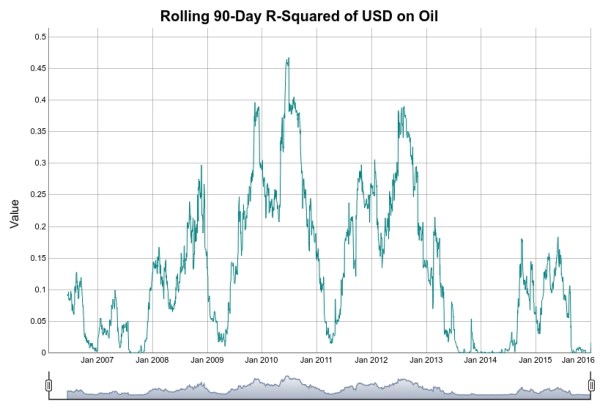 Looking at the R-Squared which is currently extremely low (0.02) indicating that the USD is not currently explaining much (if any) of the variation in oil prices.

In conclusion it appears that the USD’s relationship on oil has approached a weak point and oil prices are currently not being driven by dollar but rather by other explanatory factors.